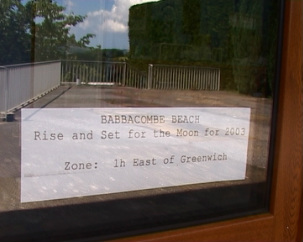 Each day I arranged to meet that day’s collaborator/s at the Dartington Gallery. Each artist brought with him/her any materials they wanted to use to create their documentation of the journey and before we left the gallery I showed them the gallery foyer space, any outcomes from previous days and the empty plinth that we would be working with on our return. Each journey was made in my car, with me driving, so that the artist would feel more strongly that they were being taken on an adventure. The intimate space of the car also created an opportunity for a conversation about the piece and its aims, as well as filling them in on key background, such as the timings and location of the rising and setting of the moon and research I did to discover this. I also explained the personal frame which I was taking for my video work and that I would be switching the video camera on at the time of the moon’s rising, despite the expected invisibility of the moon in most cases (being in the daytime and so close to the horizon, where light and atmospheric pollution is at its greatest). During the course of the week, the focus of the moon-watching tended towards Babbacome beach, as this was easily accessible and there was enough activity, both in terms of the sea and humans, to inspire us while we waited for the moon. An unanticipated aspect of the piece was the importance of waiting and the energy which this brings. There was also an unexpected difficulty in locating the moon as it rose, as my viewing direction was planned for watching it rising at the horizon, whereas the moon was not visible until it rose higher in the sky (where the contrast is greater). Unseen by us, the moon was rising quite quickly and in a steep arc, so that on the first few days of clear weather we actually missed the first appearance of the moon as we were expecting it to be further to the East, whereas it was actually appearing further South. On the last day of the project, Richard Povall and I decided to go to Ness beach, which faces South East rather than East and by watching the sky intently were able to see the moon’s gentle emergence in the sky.

There were various different approaches to both the making and installing of outcomes. Firstly, as discussed later, there were key differences in the approaches of different artists to the collaboration itself; some had already planned to create their own plinth, whereas others were only willing to be involved if the outcomes were a true collaboration. This also relates to the distinction which became apparent between those artists who were used to working alone and those from a more collaborative background, also between those who were used to creating fine art outcomes and those who were from a more performance background, or were less experienced in creating outcomes which would have to stand as such in a gallery setting.

As lead artist, I was happy to go along with whatever my collaborators preferred. I was also aware that, as far as I was concerned, all the pieces would be outcomes of a collaborative process, as I provided the context for the artwork both personally and physically. My wish was to give as much freedom to the artists as possible within the constraints of the framework of the piece.

Each day we returned to the gallery and within the constraints of available time (and tiredness!) we set about working with that day’s plinth, knowing that we must create some kind of record of or response to that day’s moon watching. On the day with Edward Lear, unfortunately we had a series of technical failures which meant that we were unable to create the sonic piece which Edward had planned, as the recordings had corrupted. This forced some quick thinking as the constraints of the piece meant that we had to complete something. In the end, I found a recording keyring at home on which we recorded a section of the sonic recording where Edward is describing an aspect of the piece that he had been planning. On the plinth we placed a series of snapshots of him describing is ideas to me by drawing in the sand with a stick.

As the plinths accumulated, I worked to arrange them in an interesting way, ensuring that each night when we left the piece had reached some kind of completion up to that point; the foyer had constant traffic through it from nine in the morning and I felt it was an important part of the piece that the installation would feel complete at the end of each day. As the days progressed the piece began to feel more settled after I had experimented with different modes of display of the plinths and associated documentation. It therefore became more obvious that there were more plinths to come and where the end point might be, as an arc of plinths was appearing in the space. I also placed a tape marker on the flooring to show the direction of North and South. The first plinth, which I created alone, was placed, directionally, as if it were the rising moon in the South East and the viewer is watching it. I then placed the plinths in an arc from this point, mirroring the movement of the moon from South East to North West.