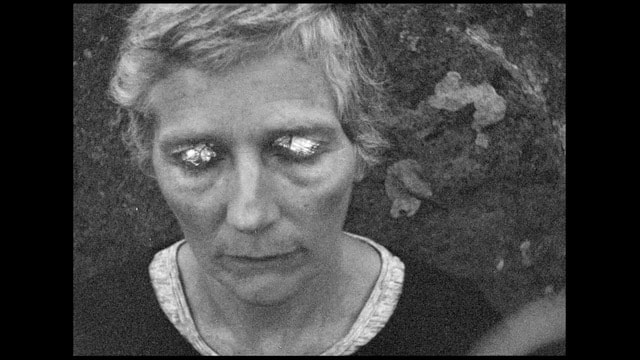 Shot at pre-dawn at Drombeg stone circle in West Cork, Ireland. A woman faces the camera and blinks and claps alternatively, her eyelids covered in gold leaf. A simple rhythm represented by clapping is juxtaposed with a local mans stories of the stones and who built them. This is a proposition for a ritual that can connect to the ancestors of this site and yet be of present relevance. This film is part of an ongoing project 'shaman non shaman' which looks at collective solidarity around contemporary ecological awareness
Aoife Desmond -Bio
Aoife Desmond is an interdisciplinary artist, recent screenings/exhibitions include; ‘RetroReflection’ Crawford Art Gallery Cork, ‘Irish Artists & Experimental Film‘ Irish Museum of Modern Art and ’Something Momentous Germinating' Galway Arts Centre 2017. She exhibits frequently both in Ireland and internationally.

Sun:Spot uses a magnifying glass, the well-travelled cosmic rays of the sun, and brings conventions of lens and camera technique (panning, tilting, focus pulling, zoom in / out, fade to black, close up, telephoto and wide angle shots) to bear directly onto the surface of the film emulsion.
James Holcombe -Bio
James Holcombe's practice merges a deep engagement with re-discovered historical, material and social processes of photochemical film production through single screen and expanded performance works.

Searching for the Moon draws attention to an oft forgotten element of our landscape, the Moon - an illuminated lantern which seems to make a journey through the sky. Caught up in the busy tumult of life, we forget that Earth too is moving, spinning on its axis at 1040 miles per hour. The Moon has been a consistent feature in the landscape throughout millennia, our ancient ancestors looked up to the Moon with the same wonder.
Melanie King -Bio
Melanie King is an artist and curator, with a specific focus on astronomer. Melanie is co-director of 3 art collectives: Lumen Studios, London Alternative Photography Collective and super/collider.

An essentially abstract film that evidences the trajectory of descending and ascending a deep well, conflating space and time visually and aurally. An open loop of 100ft of film (two minutes forty-four seconds) was dropped down the well shaft and exposed with a descending piece of burning magnesium.  A crackling sparkler was lowered down the well and recorded with a directional microphone from the top. Sound and image were edited together - one minute and forty-four seconds forwards and one minute and forty-four seconds backwards.
Rob Gawthrop - Bio
Rob Gawthrop is a Sheffield based Artist using film, sound & performance: Humber Street Gallery Hull, Tate Modern, Newlyn Art Gallery. Politics Practice Pedagogy Art in Performance Research (Routledge) 2016, Thunder and Lightning in Reverberations (Continuum) 2012. School of Noises & ISA Falmouth, Director of Art Dartington College of Arts / Falmouth University 2007-2015.
Jo Millett -Bio
Jo Millett is a Sheffield based artist who uses film, sound and video.  2017 work included a collaborative 3 screen video and sound installation in Shetland and film/performance at Humber Street Gallery Hull.  She has a practice-based PhD (2014) on materiality and senses of past in moving image.

The end of the land, harvest moon, wilderness, winds waves tides and seed.
Michael Eddy –Bio
Michael Eddy is an artist/film maker based in Cornwall.

Deep Time and the Ocean is an experimental exploration of the physical and metaphorical aspects of the sea and the materiality of film. I have captured elements of the water from above and below the horizon, revealing both the microscopic elements of water and it’s contents and the vast macro view of the sea. The film score is a combination of hydrophonic sound from the sea with spoken word by Professor John Spicer.
Rachael Allain - Bio
Rachael is an artist based in the South West. Her multidisciplinary practice incorporates both experimental still and moving image, sound and installation. Rachael’s experiments explore phenomenology in relation to site, the temporal, alchemical properties of analogue film as well as the immediacy of the virtual, scientific and digital data technology.

The stars are beacons “whose light left them long before there were eyes on this planet to receive” them (Hawkes, 1951)
The above quote articulates the challenge that humans have conceiving a universe that has existing long before we ever walked this planet. Hawkes’s lyrical meditation mingles the intimate and the eternal, the biological and the inanimate, articulating a sense of deep time. Karen Abadie’s visual meditation articulates our very personal attempt to relate to our planet with that sense of both “the intimate and the eternal”.
Karen Abadie -Bio
Karen Abadie is a practicing artist and filmmaker.  She uses film, sound and installation to create circumstances that illuminate the vulnerability of being human. Karen is a PhD student and an associate lecturer at the University of Plymouth. Projects include sound and video installations; Inner Wilderness, Behind Closed Doors and Safe House.

‘Zinn’ is an old dialect word for tin - the mines on Dartmoor are abandoned and the tin port on the Avon estuary is long forgotten. Zinn thinks about human, geological and film time. We remember the beach from our past visits and can return, but what we see is always different. The estuary is constant, but changing - its sand patterns caused by the waves, tides, winds and the flow of the river as it reaches the sea from its source high on the granite mass of the moor.
Stuart Moore -Bio
Stuart is a filmmaker and sound artist who uses digital and film-based technologies to make single and multiple screen artworks that investigate our relationship to place by exploring landscape and the environmental tensions of urban regeneration and expansion. His work is shown worldwide across public, gallery and online spaces.