Loop the Loop with Cornwall Libraries 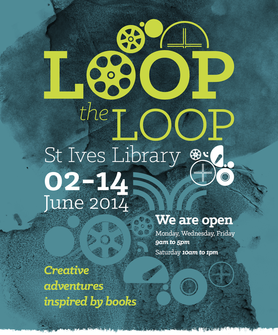 Loop the Loop is a series of collaborations between Dr Joanna Mayes and Cornwall Libraries, with support from Mayes Creative.

The first Loop the Loop event in St Ives library, Cornwall, was a series of events inspired by books. Artist/filmmaker Joanna Mayes was in residence at St Ives library for two weeks and invited visitors to talk about books, film and how to process it with coffee. Jo then invited other artists to come down during the second week, providing drop-in activities, workshops and general mayhem and a great deal of fun ensued! This was followed by successful projects at Redruth, St Austell & Bodmin; Liskeard, Saltash & Looe & also the ambitions Branching Out collaboration with Devon & Cornwall Rail Partnership & Great Western Railway (2016), linking communities through libraries, creative explorations and trains!

Thanks go to the staff at Cornwall libraries for making Loop the Loop possible. The team helped to both plan and deliver the events and worked tirelessly to ensure that it was a success. All the artists involved would also like to says big thank you to everyone who got involved and for making this a very supportive environment in which to share our work.

For further details and current activities, see the Loop the Loop project website.